As if the news of the canonization cause for a Brazilian Carmelite weren't enough news to bring Joy and Hope, this one has a very special reason to being me personal joy.

In college, at the small Teresa of Avila College in Lorena, SP, I had a special, wonderful friend, with whom I shared a small house for most of those years. Her name was Maria Auxiliadora (Mary Help of Christians, a very popular name for girls in Brazil). What my dearest friend "Dodora", as we all called her, and I had in common above all else was the family life we had left behind for college. Our parents met but once or twice, but we felt at home in either one of our families' homes. Her parents were people of strong faith and exemplary home life. Her parents' home was closer to our college campus than mine, and especially when my parents retired and moved away to our summer property five hours away, I saw myself visiting her family home often. I felt at home at their dinner table, attending mass with them, playing games or listening to her and her sisters play the piano in their lovely music room. I think in my foolish young age I hardly deserved their hospitable welcoming, and yet today I am so grateful for that family oasis when I so needed one.

One thing Dodora's family had that I always envied was the fact that she had many relatives who were religious. Indeed, her uncle-Bishop prayed her own Nuptial Mass, and as she entered the cathedral, in her simple wedding dress, holding her dad's hands as the noon bells tolled, the two of them praying the Angelus together as they had often done,  I was certain that I would probably never attend a wedding like that again.

Dodora and her siblings also had a religious auntie, the foundress of a new Carmel in a nearby diocese. Alas, I never met her but how I wish today that I could have. Because today... her oldest sister Maria Luiza, also a dear friend, named after the very auntie, posted the joyful news on Facebook. This is written by her Carmelite community: 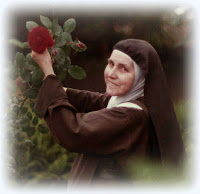 "Our mother lived steeped in the mystery of God.
We lived with a Saint who lived the life we live. But she lived it with a love so great, so intense, that spared no effort, sacrifices to be faithful to the end. Due to the growth of her reputation for holiness and graces obtained, Bishop Don Diamantino made ​​the request in Rome for the opening of her beatification process . The request was accepted. The opening process took place on March 4, 2012, at Nossa Senhora d’Ajuda Mother-Church,  in the city of Três Pontas.
We pray that her virtues are officially recognized by the Church, and that our dear mother is declared the first Carmelite Brazilian saint."

Below are more news about her life (in the old photo, my friend's  mom is one of the little sisters, and her saintly sister is the one on the right):


Mother Teresa Margaret of the Heart of Mary, whose birth name was Maria Luiza, was born on December 24, 1915 in the town of Borda da Mata in the state of Minas Gerais, in Brazil, the fifth daughter of Francisco Marques da Costa Júnior and D . Mariana Costa Resende. She was baptized in the church of Our Lady of Mount Carmel on February 10, 1916.

Reading the works of St. Therese and Blessed Elisabeth of the Trinity, during a retreat, her vocation was born to the cloistered life.

As a novice she received the name of Teresa Margaret of the Heart of Mary. She made her solemn vows on February 2, 1942.

The Carmel of Mogi das Cruzes was too humid, which hurt the health of the sisters. The community moved then to a new building in Aparecida, SP, the Carmel of St. Therese.

After some time, many bishops asked the Carmel of Aparecida to start foundations for new Carmels in their dioceses. Among these was the insistent request of Msgr. John Rabelo de Mesquita, Vicar General of the Campanha Diocese. Sister Teresa Margaret was nominated and proposed for such a task.

The monastery became increasingly a focal point for the faithful of the region. Many sought the mother superior for advice, spiritual guidance and help. Soon people as a sign of reverence and affection began to call her Our Mother


The charisma that became known in the city, diocese, and very reliable to the people of God, was her ability to listen and advise.

Because of the fame of holiness and graces through her intercession, the Bishop of the Diocese Campanha, Don Dom Diamantino Prata de Carvalho according to the Community of Carmel St. Joseph in Rome introduced the request to open the Process of Beatification, whose Postulator is Dr. Paolo Vilotta.

Getting an affirmative answer from Rome, the Ecclesiastical Tribunal was constituted.

Posted by Ana Braga-Henebry at 6:58 AM