This is how I described in our family text group:

“Good morning ☀️ family. So during this trip I met this young woman from Pakistan who is so pretty and nice, she went to an Anglican British school in Pakistan and now is at USC studying film and communication. I also met an Italian young woman who was sitting next to me—well she’s actually Spanish but lived in Italy and works in a full immersion Italian school in San Francisco.

The Pakistani girl told me it was her birthday and she had given herself this trip... she has been taking pictures with her special camera and interviewing people and writing about her trip and it happened to be her birthday!  I mentioned it to the Italian and she said, “let’s go get some wine and a muffin and have a blow my lighter”, and we did it and they became fast friends... and can you believe that the Italian woman works with the aunt of the Pakistani girl in San Francisco? Wow!

Anyway the two boys I had befriended before joined the party at the observation car, and the Pakistani girl bought dinner for everybody! ... the other guys who are around joined in the conversation and the Italian girl bought wine 🍷 … and we all had a fun time!

The boys said I was the glue and now they call me “train mom.” One is 22 and he is at Michigan State University and the other one is a mechanic engineer. They grew up in Detroit, Michigan. The second boy works in Boston on boats with dynamite in the ocean floor—for big boats to pass.

Train travel. You just never never know how it is going to be when you board. 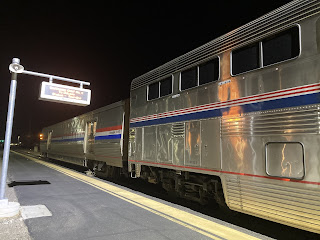 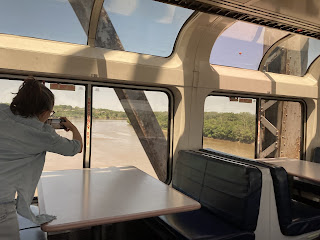 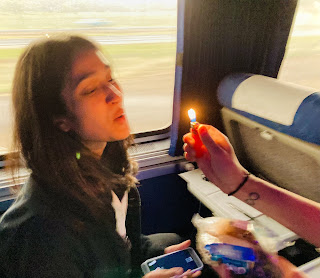 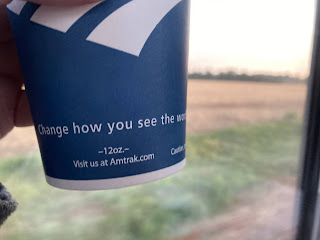 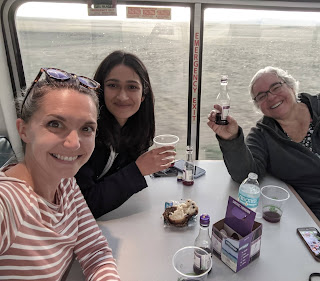 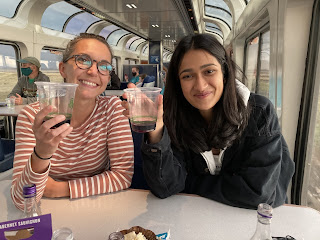 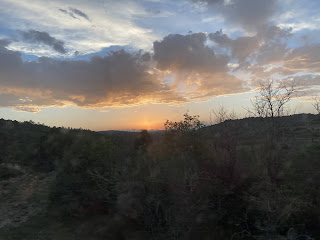 Posted by Ana Braga-Henebry at 4:31 AM