I won a writing contest!

Thanks to everyone who voted for my entry! I am simply ecstatic to have won this writing contest! Only today I am reading the other entries, and some of them are so good! Alexander McCall Smith is my very favorite contemporary fiction author. I have also made a new friend in Jennifer Crocker of South Africa, the winner of the first week's contest. A special thank you goes to John and Susan Pepino 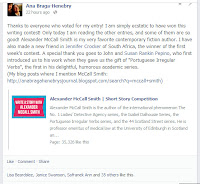 , who first introduced us to his work when they gave us the gift of "Portuguese Irregular Verbs", the first in his delightful, humorous academic series.

Update April 4
Below is the story do far:

Mma Ramotswe noticed the envelope on her desk just as her assistant, Mma Makutsi, graduate extraordinaire of the Botswana Secretarial College (97%), was making tea.

“No, Mma,” said Mma Makutsi as she poured water from the kettle into the teapot, “there has been no mail today.”

“But this is definitely a letter,” said Mma Ramotswe, reaching for the envelope and opening it.

“I don’t know how it got there, Mma Ramotswe,” said Mma Makutsi.

Mma Ramotswe extracted a sheet of paper from the envelope and began to read aloud to her assistant.

“Dear Mma Ramotswe,” the letter began, “Please forgive me for writing to you. I would like to come to speak to you personally, as I know that is more polite and I know, too, that you are a very polite lady, Mma. I am worried about my husband. He is a good man – or as good as any man can be - but he has been behaving in a very strange way. I know, Mma, that men behave in a very strange way much of the time, but there is something about the way he is behaving that makes me think there is something wrong. Even today, as I write this letter, I am looking at a half eaten piece of fruitcake that I found in the pocket of his jacket. What is a man doing with a piece of fruitcake in his jacket pocket, Mma?”Week 2 - Jennifer Crocker

Mma Ramotswe thought for a moment about the nature of men. They were inded strange to her sometimes, for instance how did you know if a man loved you? Or was he just a good man? These were questions that often occupied her mind as she drove her small van. But, the thing that interested her most was why a man would carry a piece of half-eaten fruit cake in his pocket? Then something that Clovis Andersen had told her popped into her head, the way the memory of a particularly good lamb stew sometimes does, what defined the pice of cake as half-eaten, were there tooth marks on it, or had it perhaps been placed quickly in a pocket because the man had been at a function when somebody of high standing had asked to shake his hand?Week 3 - Ana Braga-Henebry

Mma Ramotswe couldn't quite remember if her husband, the good Mr. J. L. B. Maketoni, owner of Speedy Motors, the best place to have your car fixed in all Botswana, had ever been in such a situation. But he did like cake, that he did, especially if made at the orphan farm at the outskirts of Gabarone, where she and he went often, and from where their children had come. Mma Potokwane, the orphan farm's director, knew well the persuasive power of a good cake and invariably served one to good Mr. J. L. B. Maketoni when he stopped for a visit.

Mma Ramotswe realized she was letting her mind wonder, and looked back at the letter in her hands with a sigh. She continued reading aloud to Mma Makutsi:

"Take also his very strange late habit of ripping pages from books", the letter continued. "Now, Mma, I ask you, have you ever known of a husband who comes home and rips pages from his own books?"

Mma Ramatsowe paused again and looked at Mma Makutsi. Mma Makutsi looked back at her with a intent expression. They both knew that the same thought had crossed their minds.

Mr. J.L.B. Matekoni appeared and looked at Mma Ramotswe. “Did I hear you say he rips the pages from his own books, Mma?” She gestured toward the letter, “Yes, Rra, and he had a half-eaten piece of fruitcake in his pocket.” She gazed at him, startled by the expression on his face. “Mma Ramotswe, remember that incident at the Orphan farm last summer” his voice drifted. Mma Ramotswe stared at him, “Mma Makutsi,” she said, “hold that bush tea. Rra Matekoni and I have a mission.”

Settled behind the wheel of her little white van, with Mr. J.L.B. Matekoni nervously strapped into the passenger seat, she accelerated onto the Lobatse road. “Do you think it is him, Rra? Do you think we have found the thief?” “It must be him, Mma”, he replied, “Who would steal shoes from the Orphans and then rip the pages out of so many of their books? This must be the same person. We must show this letter to Mma Potokwane.”
Twenty minutes later they were seated on Mma Potokwane’s veranda, sipping tea and enjoying generous slices of rich, moist fruitcake. Mma Potokwane shook her head as she looked at the letter, “There can only be one explanation!”

Email ThisBlogThis!Share to TwitterShare to FacebookShare to Pinterest
Labels: books, My writings

Ana,
I am so excited for you!! Hooray! Your entry was better than the 5-6 that I read... how many others entered? What do you win?
Warmly,
Candise & Crew