Where I get the dreaded phone call from a driving-teen

I was here on the computer yesterday morning, a fresh cup of coffee, beginning my morning routine. I didn't think any of the fact that the phone rang and I saw Number Five's name on the ID screen. She often calls on her way to school with a schedule change or a reminder--sometimes because she forgot something and is coming back to get it.

So it was quite casually that I said my "hello...?", only to have my heart instantly sink in fear as there was noise, and tears, and confused speech between sobs on the other side of the line. The immediate reaction was "...it happened, the phone call from a driving teenager I have feared all these years".

I stepped outside on the kitchen porch and attempted to ascertain the only crucial information. Was she ok? Was she in a safe place? Yes: she wasn't hurt, and the car, with the four other vehicles involved, was on the grassy shoulder of the wide, roomy interstate that surround Sioux Falls. I don't remember getting dressed or driving there, but I did, and in record time. During the drive there I was on the phone with Husband, and Number One, who were both extremely helpful in guiding me through what I needed to do. They called the tow truck for me and when I got there it was already at the scene.

In the accident scene, amid flashing lights and debris, Number Five was relatively calm, and happy to see me. We grabbed what else we needed from her badly bruised Rav4, talked to policemen and tow-truck guys alike,  and I began to put the pieces together: she was the third in a chain of four cars that were affected by a speedy truck. Its driver wasn't able to stop in time behind a backing-up line of cars on the road ahead of him. He happened to be another student at her school. We called attendance telling them of the accident and the two students involved, and went to a coffee shop to regroup. That's when the photo was taken. 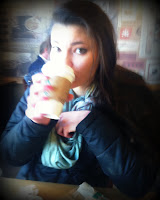 After dropping her off at school, per her request, and having alerted the office of her possible need for more pain meds, I drove back and began thinking of how grateful I was: that she seemed to be OK, that her car wasn't the one hit by the truck as the impact would have been so much worse.

It also came to me that while I don't usually drive on the interstate, I did it yesterday, and was very calm: I had a purpose.

The whole day went, for me, in a disorienting mode, as I went through the motions of our weekly Tuesday library classes. We picked up dinner in town and after returning home there was little I could do besides some obvious laundry. I went to bed early, mentally exhausted, and slept for many, many hours.

Thank You, Father in heaven.
Posted by Ana Braga-Henebry at 5:14 AM

Karen Henebry How very lucky she was and how lucky she is to have loving and understanding parents! May her Guardian Angel continue to be with her now and forever!
9 hours ago · Unlike · 2

Peggy Lottes Shlanta I dread any call in the 15 minutes after the garage door goes down. Glad she's OK.
9 hours ago · Unlike · 1

Sally Forrester Rich Wow, so glad she's OK. And a great piece of writing. You should submit it somewhere. By the way, I have only seen one other non-native speaker with such an amazing command of English!
9 hours ago · Unlike · 2

Sophia Werning Thank the Lord you girl is alright! I agree with Sally...your storytelling is riveting! I'm glad this had a happy ending!!
8 hours ago · Unlike · 1

Ana Braga-Henebry I'm known to say when your children begin driving... Your prayer life goes up a couple of notches!
5 hours ago via mobile · Like · 1

Janice Swanson So scary. VERY thankful she is okay!
5 hours ago · Unlike · 1

Mary Lou Claussen Praise the Lord that Isabel was not injured!!
4 hours ago · Unlike · 1

Patty Rankin Henrichsen That is so scary, I'm glad she's ok.
2 hours ago · Unlike · 1