Number Six texted as soon as the two earthquakes happened one day apart. She described the sensation as "indescribable" and she said "I felt was I was going to pass out". We are thankful she is on safe grounds should a third large one happen.

She has experienced so far two evacuations due to fire and mudslides, and we were saying the earthquake was the only thing missing... Since CA doesn't really have tornadoes. 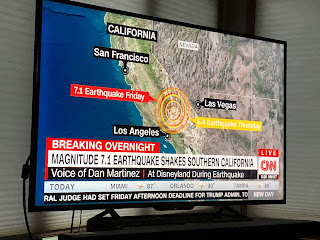 Posted by Ana Braga-Henebry at 6:07 AM