Feast of Saint Isabel the Peacemaker, Queen of Portugal

Well, it's the Fourth of July... from family text:


And ALSO happy feast day of Saint Isabel Queen of Portugal 🇵🇹 the Peacemaker! Here’s her story: Queen Isabel was born in 1271. Her father was King Peter the Third of Aragon. It is said that even as a child she had a giving & compassionate nature. She became the wife and Queen of King Denis of Portugal. As queen, she set an example of abstinence, modesty, and cheerfulness. She dedicated herself to helping the poor by establishing orphanages, institutions for the sick, housing for the homeless, and a convent for nuns. She cared for abandoned babies and even took care of her husband's children by other women. Often depicted wearing an apron, St. Isabel hid bread in her garment to feed the poor. One story tells that her unfaithful husband, King Denis, who was not supportive of her work with the destitute, confronted his Queen about her apron's contents. Upon unfurling it, the bread that St. Isabel had hidden had miraculously turned to roses, echoing the phenomenon of her great-aunt, St. Elizabeth of Hungary, who had a similar experience.
Much of St. Isabel’s personal life was filled with strife. She sought to mediate feuds between her father and grandfather, her son and husband, and her son and grandson. For this she became known as The Peacemaker. It is said that she had the ability to calm people by her presence alone.
She died in 1336 and was canonized almost 300 years later in 1625. At her canonization, she became known as St. Elizabeth of Portugal. In Portugal, her feast day on July 4th is known as Rainha Santa, literally, Queen Saint, and is a widely celebrated day. 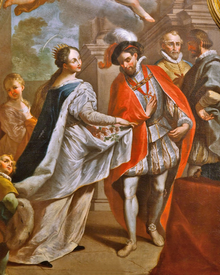 Posted by Ana Braga-Henebry at 6:01 AM