On reading articles, classical poetry, and an old teacher

Sometimes we encounter a fascinating and beautiful article... about something completely new--and old at the same time. I have joined a few Latin teacher groups on Facebook and they have been so resourceful! A member of one of them posted this. Husband and I loved it and sent it to the kids.  Read below how he closes it.

The article's author mentions "Tintern Abbey", and I asked Husband, who told me the reference is for a poem by Wordsworth. I am always amazed by how Husband has these references at his fingertips. "How do you know this??" He smiled and said that so many of the classical poetry and literary references he carried daily in his [amazing] brain come actually from his high school days... he told me he reluctantly signed up for a class on Brit Lit because his mom insisted. The course was taught by a Thomas Puchalsky... he has recently told me a bit about this amazing teacher, considered the best one the famous high school has ever had. I even foudn a Facebook group solely dedicated to his memory. Many former students are there writing their memories of the beloved teacher.

Well, Husband somehow knew Puchalsky was  Catholic--I first heard of him when Husband was remembering what a good impression the few Catholics he knew early in life had given him--and by the stories I read (his obituary is online as well) he lived his faith beautifully in his daily life--including in the way he instilled a love for classical beauty in his students.

You just never know what new things you'll find about each other doing your empty-nest years. 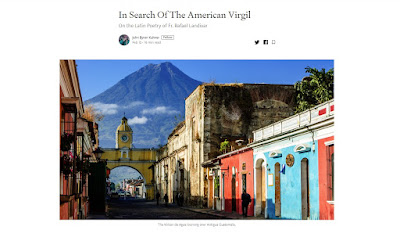 Before I left Antigua, I visited the ruins of the cathedral of San José, one of the most evocative places in the New World, a vast pile of fractured domes now open to the sky — a kind of tropical Tintern Abbey. There I read the Latin funeral oration for Archbishop Figueredo that Landívar had pronounced a quarter of a millennium before. O fugaces hominum spes, Landívar had lamented, O cito praetereuntia gaudia! Evanuit velut umbra, in momento evolavit. “Oh fleeting hopes of mankind — oh swiftly passing pleasures! It vanished like a shadow — in a moment it was gone.” There had been an entire Latin-speaking culture here, now gone. Carlos’s decision to expel the Jesuits was a turning-point in history, of the sort that will prompt endless hypotheticals about what might have been. But it was an act of destruction, like the earthquake of 1773, that also somehow preserved an image of the culture that once had been. And it also left us a picture of the curious, intrepid soul who was its witness, a man who believed a steady contemplation of the wonders of Creation, with all its conflict and suffering, would still yet lead us aright. Landívar closes the Rusticatio with an address to his young readers, which a reader of any age might well ponder:

Let another walk through the fields engoldened
With the sun’s rays without noticing, like a beast,
And waste his days with idle games.
You however, to whom acumen has been given,
Shed the old, and put on new senses now,
Swearing in wisdom to unlock nature’s secrets,
Using all the powers of your genius:
And learn with grateful effort what treasures are yours.