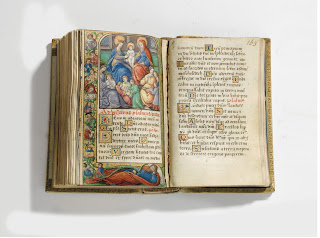 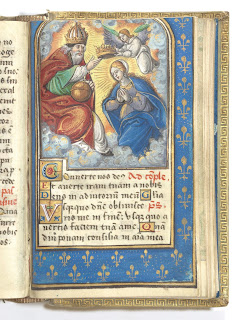 The prayer book is illuminated and decorated with a cycle of forty miniatures painted by the Master of François de Rohan, one of the most sought-after artists of the court of King Francis I (r. 1515-1547). Christie's explain, 'This sale presents a rare opportunity for collectors to acquire a significant addition in terms of the very limited number of illuminated manuscripts that can be directly connected to Mary Stuart.'
When was the manuscript created?

The manuscript was conceived, written, and lavishly illuminated for Louise de Bourbon-Vendôme, abbess and head of the Royal Abbey of Fontevraud (1534-1575). Louise entered Fontevraud as a baby and took the robe at the age of fifteen. In 1521, she became its great prioress and on 23 October 1534, Louise’s aunt, Renée de Bourbon, lying on her deathbed, designated her to succeed as abbess.
Posted by Ana Braga-Henebry at 9:12 AM