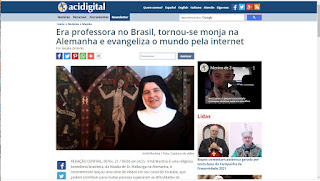 She was a teacher in Brazil, became a nun in Germany and evangelizes the world through the internet

09 Feb. 21 / 06:00 am (ACI) .- Sister Martina is a Brazilian Benedictine nun, from the Abbey of St. Walburga in Germany, and recently launched a series of videos on her Youtube channel, which can help many people overcome difficulties of the social isolation imposed by the pandemic.

The project has the support not only of its monastery sisters, but also of former students, who missed the classes of the then teacher Marta Braga, who taught in several Seminaries in Brazil, before entering monastic life.

In an interview with ACI Digital, Sr. Martina told how everything started, from her vocational calling to the realization of this project that features training videos in Portuguese, English and German.

Born in Rio de Janeiro, Marta Braga is the youngest of a Catholic family of 10 children. Her father was an engineer and, due to work, they also lived in Bahia and São Paulo. “Our life at home was full of cultural and religious activities and we have always been closely connected to the Monastery of São Bento do Rio [de Janeiro]”, she recalled.

As a teacher, she taught “in primary and secondary schools” and later did a PhD at the University of Navarra, Spain. Upon returning to Brazil, she taught Church History and Catholic Social Doctrine in Seminars and Theology courses in Petrópolis, Niterói, Nova Friburgo and Rio de Janeiro, in addition to giving lectures in other parts of the country.

“My life was very active and full of responsibilities, but God gave me the privilege to be able to take care of my old parents and to be surrounded by large families and excellent friends and students,” she recalled.

Throughout her life, she indicated Sr. Martina, the vocational call “was always there, in some way”. “My parents had a very solid and healthy Catholic faith, a faith that was deeply related to the cultural and intellectual world and to the love of others. In their arms I learned the heart of my religious life, ”she assured, stressing that she also had the help of“ priests, friends, retreats, readings, life of the sacrament and prayer, work with theology ”.

“But all this is never exaggerated; on the contrary, faith has always driven me to be more profoundly human and 'normal', so to speak. Even in the midst of many activities and trips and friendships, a voice always seemed to say that God had yet another plan for me. This plan He was showing little by little, without haste. This was not always easy, because of my own impulsiveness. But He knew everything and had his time, ”she said.

And that link between her and the São Bento Monastery also contributed to the decision to enter monastic life. “The image of the monks singing Gregorian has always attracted me for the peace, depth and stability of their life”, she said, highlighting that her “temperament” which also led her “towards a solid and experienced Catholic life, like the one I had lived in my family ”.

In addition, she indicated that "although I knew and learned a lot from several more modern Catholic movements, my love for history also made me look for something older, more proven by time".

Then, when she was studying in Europe, she started to visit monasteries, "taking advantage of the famous Benedictine hospitality that allowed me to pay for the stay with my work together with the Sisters".

On the other hand, a sister of hers who lives in the United States made contact with St. Walburga Abbey in Colorado, founded by German nuns. “And it was through this sister of mine that I visited my monastery here in Germany for the first time, thirteen years before I finally asked to enter, already at the age of forty!”, She recalled.

According to Sr. Martina, the German Abbey "has a history of almost a thousand years and precisely the solidity and experience I was looking for". "In addition to the typical silence and stillness of the monastic way, I also find here the link between faith, culture and intellectuality that for me has always been so essential".

And it is this “association between faith and culture” that makes the design of the training videos on YouTube “possible and recommendable”.

Sr. Martina admitted that she “misses teaching a lot”. In addition, she said, “living here in Germany, I miss doing something for Brazil, for my country and for the people I love so much”.

“All of this has now converged on this project, whose trigger was the situation of isolation that we all live because of the virus. I thought to myself that, in the enclosure, I don't feel much about the difficulties of social distance, but that I could, perhaps, take the time to do something that would help others to support it ”, said the nun, who had the support of“ many former students ”.

The objective, as he explained, "is very simple and modest: to announce, communicate and rejoice in the faith".

Initially, the idea was to record the videos only in Portuguese, “for Brazil”. However, as these "had some success", the sister of the nun who lives in the United States asked that she also record in English, "for her seven children and their families". They ended up “sending to friends and acquaintances” and now Sr. Martina has received feedback even from “friends in England”.

According to the nun, the two versions "already take a lot of time". However, the Abbey's chaplain suggested that she "also make a German version because the Church in Germany is materially rich, but unfortunately poor in doctrine and moral issues." Thus the German version was born, with the due approval of the abbess.

In the first series on “Freedom & Faith”, she addresses the “values ​​of monastic life that can also, with great benefit, be lived by people in the world”.

Later, she said, "other series will appear, but I still don't know what themes ... certainly something that has to do with my experience as a teacher".

According to her, “the videos will always be homemade and modest, made with the heart and without pretension of media professionalism. It is like a conversation between friends ”, indicated Sr. Martina, stressing that,“ although the circumstances of the enclosure and the time zone make it impossible for real video interaction ”, she has received“ feedback from people through e-mail and friendships are thus forming ”.

However, she stressed, the important thing is “that everything always remains humble and modest: something born from the heart and experience and submitted to the will and grace of God! He does all the rest ... ”, she concluded.

Posted by Ana Braga-Henebry at 1:58 PM