Interviewed by the Brazilian Catholic media

They interviewed me via email, and here is the link. 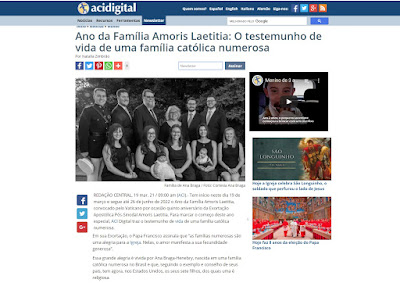 March 19. 21 / 09:00 am (ACI) .- The Amoris Laetitia Family Year begins on March 19 and continues until June 26, 2022, convened by the Vatican on the occasion of the fifth anniversary of the Post-Synodal Apostolic Exhortation Amoris Laetitia. To mark the beginning of this special year, ACI Digital brings the testimony of the life of a large Catholic family.

In his Exhortation, Pope Francis points out that “large families are a joy for the Church. In them, love manifests its generous fruitfulness ”.

This great joy is experienced by Ana Braga-Henebry, born in a large Catholic family in Brazil and who, following the example and advice of her parents, now has, in the United States, her seven children, one of whom is religious.

The seventh of Lucia and Cláudio Braga's ten children, Ana gratefully recalls the teachings she received from her parents, still in Rio de Janeiro. The couple, who were part of a group of young Catholics in the 1950s, "studied and followed their Catholic faith."

In their marriage, Lucia and Cláudio "had insisted on nuptial mass and communion, which was rare at that time". For Ana, the celebration of their parents' wedding “set the tone for the rest of their married life: what was important to them that happy morning — the sacrament and simplicity — remained important to them throughout their lives”.

As she remembers, she and her brothers grew up in an “environment of faith, prayer, love and dedication”. From childhood, she keeps in mind the dinners or “nights in the living room”, when the family shared cultural moments, knowledge. “On Sundays, Mass was sacred, as well as prayer before dinner, every night, around the big table with benches on both sides. We also prayed at bedtime, not only for our family, but for the world”.

Ana also says that her family had the grace to see an early daughter born. “As I remember my mother waiting for my little sister Marta at 46 years of age”, she expresses. According to her, "at a time when it was believed that the Church was going to change its age-old teachings on artificial contraceptives, our parents were an eloquent and courageous witness of fidelity to God."

“Mom told me, when I was already married, how she and Dad knelt, crying, in a prayer of gratitude to God, when the encyclical Humanae Vitae was promulgated. The beautiful encyclical, whose text is a true love letter, reiterated the defense of life and prophesied the evils that artificial contraception would bring to the world ”, she reports.

This youngest daughter was a “great blessing” from her parents “in old age” and, after they died, “she entered a Benedictine abbey in Bavaria”, Germany, and today she is known as Sister Martina.

Over the years, after completing college in Brazil, Ana went on to do a master's degree in the United States, where she met her husband, Geoff. He soon fell in love with her parents, because of "their authentic faith".

“At the beginning of our marriage, we asked them for good advice, advice that we used during our married and family lives. These were very precious to us: to follow and trust the teachings of the Church, because they bring peace, joy and security; remain open to life, with generosity and confidence; to live the marriage knowing that, at the wedding ceremony, when we promise to accept the children that God in his generosity sends us, we already expect and love each of our children in advance ”, she says.

Ana had seven children and guarantees that the family's life "was never easy" and they always lived "with economy". "We never had a Disney vacation budget, and the end of the month was always tight ... but my days with them were so happy, and the shopping cart at the supermarket always had several little helpers and at least one baby," he says.

“Walking through life with our children, I began to glimpse how many have a heavy and sad heart due to the choices they made regarding the family, believing in the empty promises of living in selfishness, of false freedom, without ever having lived the life that seems to others' chained to the house and the children '”, laments Ana Braga, stressing that, this family life, in fact,“ brings peace and freedom to be living a natural vocation, and so spiritually fulfilling ”.

Thus, she says she is very grateful to live her marriage "in peace and joy, following the advice and example" of her parents. “Until today, it is what we have and give the most valuable to our children”, she guarantees and tells that she sees the fruits, with the children “finding their vocations, some starting their families” and one in the religious life.

For Ana, "Catholic life in the family can reign in all activities at home". “From the beginning, we led a life of prayer with the children, and every night we met in the living room before bedtime”, she quotes.

On these occasions, each child, "even the smallest, said to whom or what he would like to pray for". "This brought a lot of communication between the family about what was on the mind and heart of each one," she underlines.

“Prayers ranged from a simple ten of the third to a specific novena of a liturgical season. One aspect that the children always liked was to call their patron saints in a litany of saints ‘personalized’ for our family,” she recalls.

Other activities that added to the family's life of faith were participation in the parish community, daily Mass when possible, the sacraments, religious education, volunteering in parishes, in addition to opening “the doors for visits by priests and nuns”.

Thus, he recalls that, “for many years, with children growing up at home, this was our life: to live each day the best we can, trusting and asking every night with the family that God guides us, day by day, our plans, our decisions. That left us to sleep each night in the peace that really rests”.

"Nowadays, with our youngest already far away, in university life, and the others headed in life, we look back and marvel at how God guided and helped us around every corner of life," she observes.

Cultivating a religious life at home

Among the fruits of Catholic family formation, Ana Braga-Henebry saw her vocation to religious life grow in one of her seven children, Sister Maria Perpetua O. Praem. However, she points out that it is not a family merit, because "a religious vocation is a call from God" and, "at home, the family can be an environment where that call is cultivated".

“With the grace of God, one of our daughters entered the religious life. We miss her a lot at home, but also a heart full of joy and pride for her courageous and mature option for the cloister,” she says.

Asked about how to cultivate this call of God in her children, Ana indicates: “Living the faith at home, through prayers, the exercise of virtue, the study of the history of the Church and the life of the saints, this way we can cultivate an environment conducive to this answer.

For her, “parents can always include the priesthood or religious life in conversations about the possibilities of future occupations for their children. Opening the doors for priests or nuns to visit is also very good, so that the children have the opportunity to get to know them better”.

In addition, she points out the importance of “volunteering in the parish”, as well as “looking for other family opportunities such as the adoration of the Blessed Sacrament or the Way of the Cross”.

Finally, she quotes her own daughter's words to the families before entering monastic life: met you before forming you, and created you for a reason. So take a sincere look at yourself, your interests and desires, and ask Him to show you what to do with all of this. She prays with Santo Afonso de Ligório: ‘Lord, make me love you always, and then do what you will with me’ ”.

Posted by Ana Braga-Henebry at 7:49 AM