I made a fruitcake! 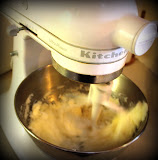 I gave the ingredients to Husband for Christmas, with a promise of a fruitcake. I have never liked fruitcake, and especially disliked the exorbitant price you pay for a small tin. A couple of years ago I ate a fruitcake made by my friend Mary and loved it, and she told me how to make it. Mind you, Mary is in California so I made this one based on two-year-old directions. It's no use asking of a detailed recipe. I didn't measure anything (except for the basic recipe) but I will share the information I had. It was enough to make a wonderful cake--approved by the highest fruitcake authority in this house: Husband! Even if my only "spice" in making this cake was a good pure vanilla.

So I bought dried fruits: apricots, cherries, cranberries, pineapple and golden raisins. Not the candied ones, just the plain dried fruit, grocery-store brand. I chopped the bigger ones somewhat and added a bunch of walnuts, probably two cups. Poured a nice amount of vermouth and let them soak a while--probably half a cup.

In the meantime I made half a recipe of my basic Brazilian cake batter--see here. Just a very classic homemade cake with the butter creamed and the egg whites  beaten separately etc.

I folded the batter in  and it all went into a Bunt pan into a 350F oven--it was thick and it took a while for the knife to come out clean.

A little Port was poured onto it while hot, and before serving I added a thin glaze of milk/powder sugar.

I am simply delighted that now I can make a fruitcake that tastes so much more "real" than the pricey ones in tins smelling like cheap rum!

Posted by Ana Braga-Henebry at 7:37 AM

Love the turorial and recipe. Even a few amounts and temps in the recipe!!!! ; ) Lighten up that picture of you and Geoff-it is so good!

I have my mom's recipe for fruitcake. She used to make it every October. I keep telling myself that I will do the same and give a cake to each of my siblings as a Christmas gift, but it hasn't happened yet. Hopefully, it will this year. I hope that you and your family have a blessed 2013.