On the Newspaper today! 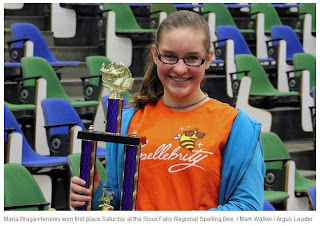 Maria Braga-Henebry placed first in the Sioux Falls Regional Spelling Bee and will advance to the state competition of the Scripps State Spelling Bee, along with two other youths.
Braga-Henebry came in first place after spelling “kinetic.”
While “kinetic” surely wasn’t the most difficult word she had spelled during the competition — that was “yttrium,” one of the rare earth elements — it was her most important.
Braga-Henebry, who is home-schooled, said the toughest words for her to spell are words of German origin. She said the pronunciations of the words are sometimes a little tricky, but extra studying makes it a little easier.
“Sometimes they will have three consonants in a row, and you only hear two of them,” she said. “I take Latin and French class, and that helps me. I also got a list of words from different languages online, and I study it every day.”
After navigating through words most parents in attendance had never heard, let alone spelled, Braga-Henebry will be among the three top regional spellers to compete in the state spelling bee March 23 in Vermillion, sponsored by the University of South Dakota. The other two finalists are Lexis Sherron of Brandon Valley Middle School and Sam Anderson of Edison Middle School in Sioux Falls.
The Regional Spelling Bee was held at the Gilbert Science Center on the Augustana College campus. The spelling bee is sponsored by the Greater Sioux Falls Home School Association.
Forty-three students from Sioux Falls, Brandon Valley and Garretson elementary schools and middle schools qualified for the written portion of the regional spelling bee after winning their school’s spelling bee.
Only 20 students were chosen to take part in the oral competition. Those 20 spelled more than 50 percent of the words correctly.
Nels Truelson, director of Greater Sioux Falls Home School Association, wants to maintain traditional-style spelling bees. He said a lot of people think spelling is a matter of pure word memorization, and now with the use of spell-check, some people find no need in progressing as a speller.
“Nobody is going to memorize all the half-million words in the unabridged dictionary,” he said. “They’re going to face unfamiliar words in this competition, and the thing that distinguishes true champions is being able to figure out those unfamiliar words.”
The state bee will feature students from the Rapid City area, Sioux Falls area, Mitchell, Vermillion and Watertown.
The winner will qualify for a trip to Washington, D.C., to participate in the National Spelling Bee in May.
Last year, Braga-Henebry finished third in the regional bee but went on to win in Vermillion at the state bee.
This year will be her last year to compete in the Scripps spelling bee program — the cutoff is eighth grade. She encourages those who’ve considered competing to give it a try.
“You want to try, because even if you don’t get it right the first time, it’s a good experience,” she said.
Posted by Ana Braga-Henebry at 8:50 AM

Patrick aka Number One said...

awesome! congrats on the win, the writeup, and the consistent poise, Maria.

although they didn't mention at all that you went to DC last year...